JSC Lietmeta, a company whose main activity is the production of corrugated cardboard, while constantly investing in new technologies has implemented the project “Installation of a solar power plant to reduce traditional energy consumption”, project no. 04.2.1-LVPA-K-836-02-0006. The project was implemented under the measure “Renewable energy resources for industry LT +” co-financed by the European Union Regional Development Fund. Up to 60,051.88 EUR of funding has been allocated for the implementation of the project to cover eligible costs. During the project, the company installed a 99.9 kWp photovoltaic solar power plant on the roof of the building. After the implementation of the project, the share of electricity consumed using solar energy reaches about 11 percent of total energy costs of the company. Technical solutions were implemented in 2018.

The implementation of the project has created conditions for the continuous improvement of the company’s performance, increase of productivity, which is a prerequisite for the sustainable and long-term development of the company, which has created direct benefits for the company for many years after the project. Equipped with a modern photovoltaic solar power plant allows the company to produce products more efficiently, with lower costs and thus increase its competitiveness in both the local and international markets.

The project has contributed to the long-term goal of the National Sustainable Development Strategy – to base industrial development on the introduction of the latest technologies with lower environmental impact, increase not only economic but also ecological efficiency of enterprises, use resources more economically and reduce environmental impact. 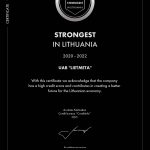